Post your creations here. It can be either a cool genome or an interesting ecosystem. Indicate if you designed it yourself or if it was created through evolution, or both :). File, picture, or video is required.
Post Reply
4 posts • Page 1 of 1

Again, I feel a little silly posting this as I'm sure someone else has already covered this territory somewhere, but I like to show off my achievements, even if they are redundant.

I've been playing around with smart floaters lately. One big frustration is fine tuning the buoyocyte of a floater so that the organism is neutrally buoyant. It was enough of a frustration that I decided to create an organism that would automatically configure itself to any environment (with in a reasonable range).

After a lot of tweeking this configuration finally worked! I had a an organism that would automatically adapt to whatever density and gravity system it was put in. Density gradients had no effect on it as it would just adapt as it moved to up or down the gradient. I made two organisms based of of this system. A blue flying saucer shaped creature (UFOs) and a pink saucers with two bouyocyte legs on the bottom of it for extra basalt (Landers). 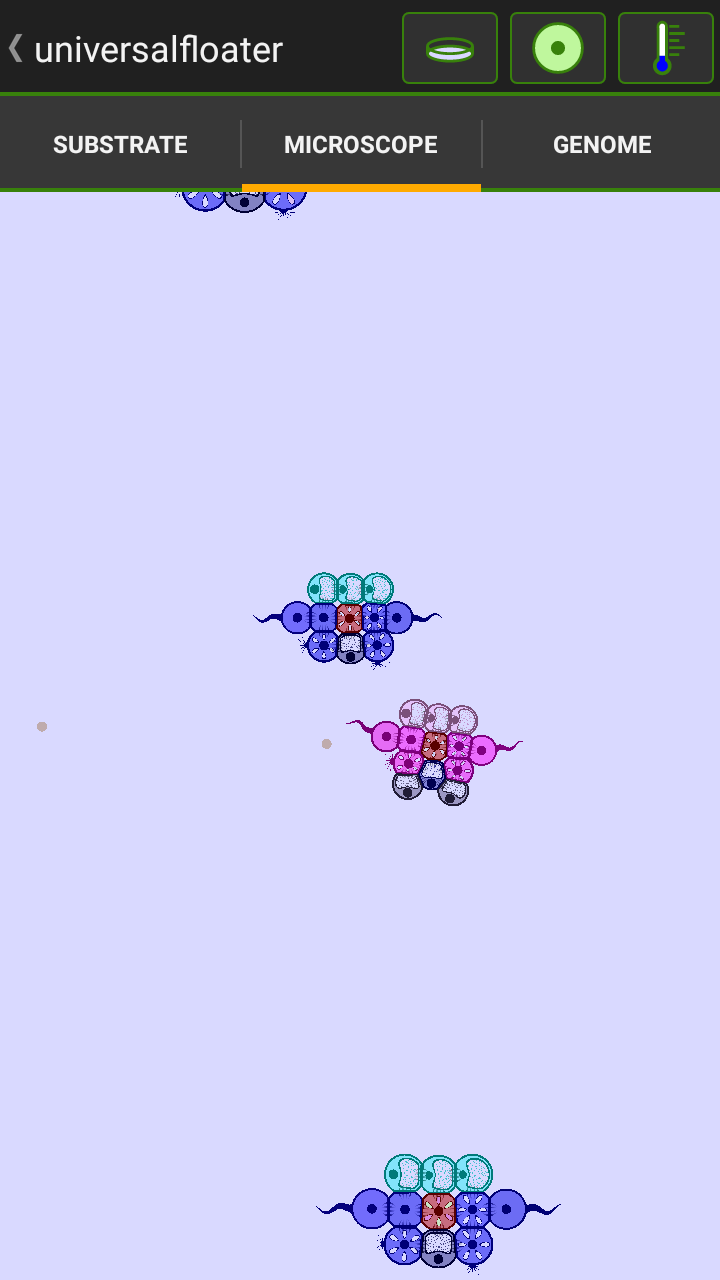 The organisms use a neurocyte and a velocity sensing stereocyte to control the density of the buoyocytes. The neurocyte had a channel that produced S1 from S2 and a second channel that produced S2 from S1. Once I fine tuned the rates of the two channels (which took FOREEEVVVEEERRR) the neurocyte served as density memory, staying at what ever production level it was at, unless an outside input changed it. The outside input was the stereocyte. As the organism sinks or raises in a substrate the density memory is adjusted to until the drift is stopped.

The UFOs are more biologically efficient than the Landers and can move quicker left to right. The Landers are slightly unblanced with their legs so if the flagellocyte push too hard they star tipping. However the Landers have a greater range of density that they can adapt to. If the density is positive, a UFO will flip over (flipping is death for these organisms) but the Landers will work in a density as great as +.8 (greater if you adjust the setting of the buoyocytes) and have a range down to -.8 (again greater if you tweek the buoyocyte to shift the usable range down). UFO are only good from about +.1 to -.7.

Here is a substrate with both Landers and UFOs on it. The substrate has a pretty heavy density, gradient but you will notice this does not bother the organisms at all. The only effect the gradent has is preventing the UFOs from going all the way to the bottom of the plate, where the density gets to high. You will see the UFOs out compete the Landers in the upper 2/3rds of the plate but the bottom 1/3rd is a safe ecosystem for them.

One final note: Landers because of their slow speed and hook like feat have a bad habit of blowing the heads off their children if they reproduce to quickly in succession. This happens often enough to negatively effect their surviablity. I have to figure out some why to get the children away from the butts of the Landers after they are spawned.
Top

Quite a nice pair of organisms you have created there! Their food-seeking is especially good, and they seem to make the most of those large nutrient chunks.

I think there have been a couple related organisms before (bwisialo had some UFOs IIRC), but it's always a good feeling when you create your own. The necessary fine tuning for something like that is daunting, so nice work on overcoming that.

I admit I don't understand the role of the velocity sensor here; does it help them stay vertically oriented? They stay nice and level as long as they aren't bumping into each other, and tend to stay where they are even if the substrate density changes around them.
Top

wapcaplet wrote: ↑
Fri Jan 04, 2019 3:17 am
I admit I don't understand the role of the velocity sensor here; does it help them stay vertically oriented? They stay nice and level as long as they aren't bumping into each other, and tend to stay where they are even if the substrate density changes around them.